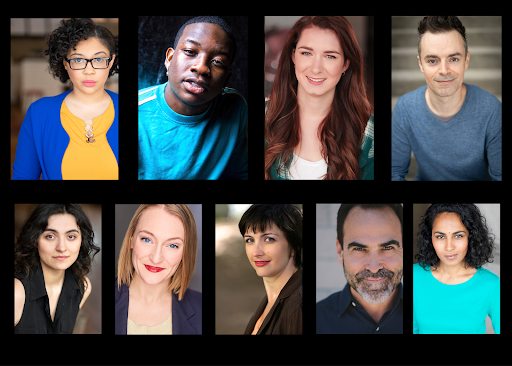 PROBOSCIS THEATRE COMPANY ANNOUNCES CAST OF  “QUEENS OF INFINITE SPACE” SET TO PREMIERE JANUARY 16 – 21, 2022 AT EPIPHANY CENTER FOR THE ARTS

Chicago (December 7, 2021)- Proboscis Theatre is proud to announce the cast and production team of the World Premiere of The Queens of Infinite Space written and directed by Founder and Co-Artistic Director Jeff Mills, running Sunday, January 16 – 21 at Epiphany Center for the Arts.

The Queens of Infinite Space follows William Shakespeare (Tia Pinson) as they attempt to write their next masterpiece in the wake of a massive public health crisis. The year is 1603.  The Bubonic Plague is waning and London is emerging from Lockdown. William Shakespeare is the most famous celebrity in England and he’s trying to write another masterpiece. But things changed during quarantine.   It’s a new day and nobody can rest on their laurels. The Copernicans need him to use his ridiculously popular platform (theatre) to tell the scientific truth that Earth dwellers are not the center of the Universe.  The new Queen of England is pressuring him to use his pen to destroy the reputation of her Danish royal family, especially the scoundrel Astronomer Tycho Brahe.

Performances of Queens of Infinite Space are at Epiphany Center for the Arts Sunday, January 16 – Friday, January 21. Doors open at 6 PM (CST) with a performance start time of 7:30 PM (CST). The show is approximately two hours. Tickets are $15, $30, $45 and $120 at Proboscis.org with each price level coming with different access and gift levels. Email info@proboscis.org for all accessibility, sponsorship and ticket questions.

For more information, visit Proboscis.org and follow the company on Facebook for all of the latest show and company news.

Proboscis is a multidisciplinary performing arts company that creates a theatrical world that sparks imaginative collaboration between the audience and artist to provoke, challenge, and transform the community in which they thrive.

Since the founding in 2010 by Jeff Mills, Proboscis has become a hub for New Development in Playwriting, Artistic Development and Community Outreach. The company coordinates semi-annual acting intensives to study abroad in Greece and maintains a close relationship with their sister company Prague Shakespeare Company in Prague, Czechia. In addition to studying abroad, Proboscis has ongoing workshops in acting, movement, stage combat throughout the Midwest.

About Epiphany Center for the Arts

Conceived with the vision to return Epiphany to a place for people to once again congregate in, the shuttered, historic Church of the Epiphany has been preserved and adapted into an iconic cultural hub ‘For the Good of Art, Entertainment and Events.